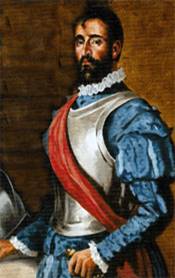 San Luis Pass and Brazoria County go deep into Texas history. As early as 1528, a Spanish exploration, led by Cabeza de Vaca, landed on an island. The sailor called it the Isle of Malhado meaning the Island of Bad Luck. The actual location of Malhado has been disputed over the years. However, in 1897, two University of Texas students, Miss Brownie Ponton and Bates H. McFarland, pinpointed the landing as San Luis Peninsula, formerly San Luis Island, in Brazoria County.

The maiden voyage of the Spanish exploration set sail for the city of Panuco, Mexico. They encountered storms near Cuba and two ships were lost. Finally, the fleet made port and anchored in the Bay of Tampa, Florida sometime in April, 1528. They had lost critical items of survival in the storms. They had no hand tools, iron, smithery, pitch, tacking, nor was anyone there to instruct in ship building and above all, there was no food. Little by little they fashioned tools from their spurs, crossbows and any ornaments of iron available. Twenty barges were crudely constructed by hand and again, a now smaller fleet set out for Mexico. After a few days at sail; a northern blew in: The barges were scattered and soon became-hopelessly lost at sea. 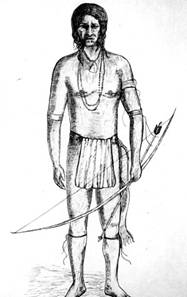 At the mercy of the tides, they drifted for seven days, as it was almost impossible to steer the crude vessels. Near dawn on the eighth day, the sailors woke to the sound of breakers. Drifting down the coast for a distance, they set ashore on Malhado (Island of Bad Luck, or San Luis Island). Later Cabeza de Vaca would write that disease, cold and ill fortune had reduced the survivors from 80 to 15. The sailors traded with the Karankawa Indians who inhabited the island and at times, De Vaca was a medicine man and sometimes a slave. He constantly plotted an escape and in 1536 they futilely slipped away, crossing Oyster Creek, the Brazos and the Bernard and the Caney rivers on their way down the coast. The next three centuries (some 287 years), the history of our Island is somewhat clouded. Records indicate large boned, six foot tall Indians inhabited the land. The Karankauas lived off the land, never building any form of structured housing. In the early 1800s they were the most aggressive and by far the fiercest of all Indian tribes who roamed the coastal plains. The Karankauas were thought to be cannibals. The only recorded incident of cannibalism in the Northern Hemisphere happened right here on San Luis Island. In 1855 the tribe was all but gone, having been vanquished by the white man.

The City of San Luis was the dream of a forty year old Philadelphian named Ian George Hammenken. He was convinced a great port could be established on the Island of San Luis. In 1839 he persuaded businessmen and foreign investors to fund the project. Settlers were not long in coming, lured by brochures picturing the spot as a new paradise on earth. In 1840 John Baldbury Follett established a shipyard here. After his death, his sons moved with their mother and sisters to the now deserted town of San Luis. They built a halfway house for travelers who made the journey from Velasco and Galveston. It was in operation for more than 50 years. 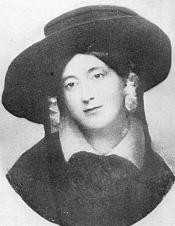 Mary Austin Holley visited the Island in November. 1840. She could hardly believe her eyes when she saw the wharf of San Luis. It was a thousand feet long with eight sailing vessels tied up to the dock. By then the town had a newspaper (the San Luis Advocate), a hotel, two general stores, a cotton compress and a thriving shipping business, as well as a number of residents. A ferry traveled regularly back and forth across the pass to Galveston. The fee for the trip was 61 cents per person, $1.37 for a man and horse, $1.00 for a man with wagon and $1.50 per head for cattle. The good times were not to last. The depression that plagued Texas in 1840 took its toll on the city. The harbor began to sand up and it became dangerous to enter the port. People soon packed up and left. In 1883 only 400-500 of a population of 2,000 remained. A great storm that year drove the balance of the residents to seek a safer place to make their homes.
The Follets continued to operate a halfway house even after the damage of the storm. It was described as a colonial style structure, two and a half stories high, with fifteen rooms and open galleries on each floor. Oleanders surrounded the house and grew so tall that they reached the third floor. It is believed that the house stood between the Pier road and the Hades house as bricks with a Philadelphia imprint were unearthed during the construction of the Hades house some years later. The house was damaged again in 1852 and 1854 and both times it was restored, but the storm of all storms in 1900 destroyed the house completely and it was never to be rebuilt. 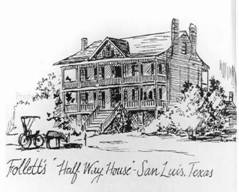 The Follets operated a ferry service across Little Pass and Big Pass. The ferry also served as a mail service. The family raised cattle and sheep and grew many crops except corn. They had two sailboats for shipping the produce. One of the Follets sons, Alexander Glass Follet served in 3 wars, the Texas Revolution, the Mexican War and the Civil War. During the last war, he was taken prisoner and held for a time on a Yankee gunboat off San Luis Pass.
There is no San Luis Island today, but the peninsula was once an island, cut off from the mainland where the waters of present Cold Pass emptied into the gulf instead of into San Luis Pass as they do today. This cut was known as Big Pass. The Little Pass, about 150 yards wide and very deep in the middle was open as late as 1885. Over the years, the pass filled with silt, and the island became part of the mainland.

In 1967, the legislature created a tract known as the Treasure Island Municipal District. Time wealth Corporation, a developer, owned Treasure Island as we know it today. Hard times again visited the island in the early 1970’s and the corporation went out of business, selling the water system to an investor. In 1973, several property owners revitalized the dormant San Luis Pass Civic Association which had been formed in 1967. In cooperation with TIMUD, this group negotiated the buy-back of the water system along with the responsibility of its management.

As the population of Paradise Island grew, the need for general merchandise, gas station, bait supply, hardware store, etc. became a necessity. Tom Bright, then the General Manager of the Civic Association, had the foresight and belief that the community would continue to prosper and decided to build such a store. The mighty hurricane of 1983 leveled the Bright Light, but just as the Follets had many years before, Mr. Bright rebuilt his store. Little did he know then, the Bright Light was to become a headquarters for our community, providing far more services than a general store.

In April of 1992, the SLPCA and TIMUD were successful in the installation of a new water system, via the San Luis Pass Bridge. When clean, clear, drinkable water from Galveston began flowing into every home on Treasure Island, our quality of living was greatly improved.

Some 25 residents claim the island as their full time homestead, others enjoy it only on occasion. However, we are told, for those who must depart, it is always with reluctance but also anticipation until their next visit to the Island of Bad Luck.

And that’s the way it’s told…